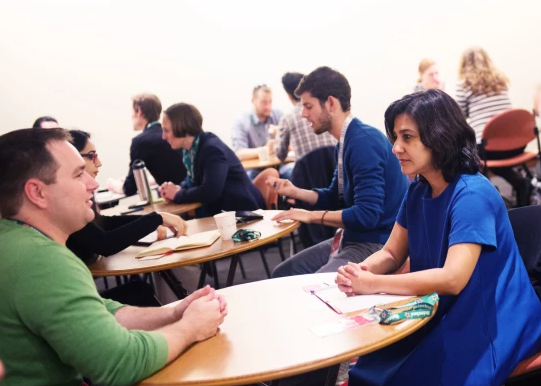 First-person pronouns like “I,” “me,” and “my,” are unavoidable, but they can land you in hot water if you don’t know how to use them.

Try going a day at work without saying “I”–bet you can’t do it. The same likely goes for “me” and “my,” pronouns we use so frequently that we’re almost never fully conscious of them. But these tiny words, in addition to other common “function” words–like articles, prepositions, and conjunctions–may carry more weight in our speech than many of us suspect. And according to the social psychologist James W. Pennebaker, first-person pronouns in particular don’t always communicate what we think they do.

What does this mean for you and your career? For starters, Pennebaker’s research suggests that “I” and its ilk may resonate in others’ ears differently than you intend them to. When you use the first person, there’s the danger (admittedly an unfair one) that you’ll be perceived as self-promotional even when your speech patterns aren’t necessarily unusually “me”-centric.

Because language is complicated and bias is pervasive, there’s only so much of that that you can personally control. So it therefore doesn’t hurt to hedge your verbal bets. Here are five workplace situations where balancing “I” with more inclusive phrasing–or cutting it out altogether–is probably a smart move.

1. Speaking Up At Meetings

We often use “I” in order to get heard in meetings, but there’s a need to tread lightly. If the first words out of your mouth are, “I don’t agree,” or “I would look at it differently,” or “Here’s what I think,” that “I” can sound off-putting, particularly if you’re disagreeing or presenting a new perspective.

Yes, you can still use “I” and sound like a team player, but that often means throwing in some third-person verbiage as well. Kick off your comments by referring to the previous speaker or to the subject of conversation (rather than the people conversing). For example, “To Josh’s point . . .” or, “Looks like we’ve got a number of ideas on the table, so it seems to me . . .” Once you’ve built a bridge to your audience first, you can go on to show what you believe, including by saying “I,” “me,” or “mine.”

Sure, it’s tempting to emphasize what you’ve done, and there are times when you actually need to underscore your own role in order to get ahead at work. Just be careful how you do it. Never use “I” to claim the glory if other people have been involved–after all, nearly every project draws on the talents of many people.

Suppose you’re the art director for an ad campaign; there’s also your boss who developed the strategy, your boss’s boss who approved it, and the client who said “yes” to it. Even when pressed by someone who asks, “Did you design the campaign?” don’t just say “yes,” flash a smile, and leave it at that. Instead reply, “I had a role in the design, but it was a real group effort and we’re proud of the outcome.”

Not hogging the spotlight doesn’t mean disappearing from it entirely, of course. Women frequently deflect compliments by saying, “It was the whole team,” or even, “Oh, it was nothing.” The best thing to do is connect yourself with the accomplishment without taking sole credit for it. Say, “I’m so proud of my team. We had a great win”: one “I,” one “my,” and one “we”–that’s a balanced way to accept praise that’s directed at you rather than the whole group.

3. Showing Your Chops In A Job Interview Or Performance Review

That hiring manager is considering you for a job, and your boss is looking at your past work to decide whether you’ve earned a promotion. But overusing “I” can still backfire.

Sussannah Kelly, executive vice president of DHR International, a global executive search firm, told me that candidates typically don’t realize that the hiring processes isn’t just about them; the roles they’re auditioning to fill are really about solving problems for the team that role belongs to. “And sometimes they come out of the actual interview and tell me they knocked it out of the park,” Kelly says. “Then they discover they didn’t get the position because they focused on themselves and not enough on the company or the position.”

A surefire formula for preventing this from happening is simply to say what you did, followed by the impact or outcome for the group. This holds true for cover letters and networking emails as well. I once got a note from a candidate with eight short paragraphs, each beginning with “I.” Despite his strong credentials, I decided to take a pass.

Too often, introductions during networking begin with a perfunctory “hello,” then move quickly into monologues freighted with “I’s.” It’s deadly stuff for the speaker and listener alike.

Instead, walk into the event, grab a place next to someone who looks interesting or approach the VIP you’ve had your eye on, then start asking questions. How did they like the speaker? Why did they come? What do they do? Be complimentary, and make them feel good (“Love your shoes!”) Keep talking until you have common ground. Then you can resort to those first-person words, explaining why you came, what you do, and what you and the other person might do together.

5. Talking To Your Boss Or An Executive

When we’re speaking “up” the organization and want to impress those above us, it’s easy to release a flurry of “I’s” as we describe our accomplishments. Self-justification in the face of authority is totally normal. The irony is that, rather than making you sound more powerful and centered, this can actually make you sound weak, insecure, and needy.

In fact, Pennebaker’s research indicates that people with less power and lower social status use pronouns like “I,” “me,” and “mine” and so-called “auxiliary verbs” (like “be,” “is,” “are,” “have,” “do,” “might,” and “should”–the stuff that usually accompanies an action verb) more frequently than those of higher rank (Pennebaker has theorized that “lacking power . . . requires a deeper engagement with the thoughts of one’s fellow humans,” as the Times summarized it in 2011). So when you’re talking to someone more senior to you, focus less on yourself and the interpersonal politics involved than on the organization itself–the needs, goals, and outcomes everyone is pulling toward.

The slippery nature of unavoidable pronouns like “I”–just like other common words and phrases–means there will be times you really can’t control how your speech sounds to others. But one overall rule can help you maximize your impact: People simply like to know that you’re interested in them, not focused on yourself. Using collegial and collaborative language will build bridges to your audience, and hopefully result in more respect and authority for you.

No items found.
2023 Job Market Outlook
Lag Time and Positions Slowing Down the Interview Process
The Basics of Career Development: National Career Development Month
Mental Health Awareness Month: Normalizing Mental Health as a Priority in the Workplace
How We Serve Our Community
Tips to Spring Clean Your Resume
The Importance of Female Mentorship for Women in the Workplace
How to Fall in Love with Your Job this Valentine’s Day
What Should You Expect from the Job Market in 2022?
Defining Your 2022 Business Pillars
Professional Partying: A Guide to Office Party Etiquette This Holiday Season
Is Your LinkedIn Profile Ready for Your Next Job Search?
Now Hiring: Are You Prepared for the Fall Job Search Surge?
The Case of COVID-Carryover: How to Manage an Excess of Employee PTO
Should You Offer Summer Fridays To Your Workforce?
The “Cans” and the “Cannots” that Employers Need to Know About COVID Vaccination Requirements
Getting Back to Business
The Importance of Company Culture
The Secret to Employee Retention
Unexpected Resignation: To Counteroffer or To Not Counteroffer?
Every Professional Should Have a “Me File” – and Here’s Why
Setting Up New Leaders for Success
Hiring Through the Holidays
Listening and Learning: Ted Talks on Diversity, Equity, Inclusion and Privilege
Tools and Resources to Promote Diversity and Inclusion in the Workplace
Top 10 Hot HR Compliance Topics
Temporary Work from Home Policy and Agreement
How to Maintain H/R Files Properly
FLSA Exemption Questionnaire- NYS
HR Compliance 101
Why is HR Vital for Small Businesses?
How to Win the "Networker of the Year" Award
The ABC's of Action Verbs to Include on a Resume
Commonly Asked Behavioral Interview Questions
How Do I Answer the Weaknesses Question?
If Job Search Advice Seems Odd, It Probably Is
How to Talk to People You Don't Know
Getting Interviews - Not Closing the Deal
Let’s talk About Millennials
Be A “Product” Employers Want to Buy
Bragging Can Be Difficult, But Critical in a Job Search
How to Answer “Why are you looking for a new job?”
Job Interview Success Is in The Details—The Handshake
Prepare Yourself for a Counteroffer, But Never Accept It
How To Prepare For A Phone Interview
Preparing for an interview
Why on earth would you put your address on your resume??
Securing Diverse Leadership Talent Through Search Firms
Importance Of Thank You Letters After An Interview
Top 5 Must Do's for Creating Your Reference List
The First 56
Hey YOU! Stop Lying!!
How investment bankers should NOT answer this interview question
The top U.S. cities to get a financial services job outside of New York
Five Times This Extremely Common Word Can Hold You Back at Work
PreviousNext

How to customize formatting for each rich text